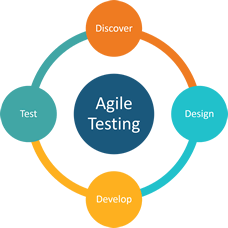 Agile model take the processes to extreme to ensure that customer requirements are met in correct time. In this model, customers partner with the project teams to go step by step in bringing the project to completion in  phase manner. The customer becomes part of the project team so as to clarify any doubts/questions. Agile methodology emphasizes the involvement of the entire team, and their interactions with each other, to produce workable software that can satisfy a given set of features. As a result of such interactions, all ideas interchanged. Software is released in small releases, with features being introduced in increments.As the changes are introduced incrementally; responding to the changes becomes very easy.Testing tool training in Hyderabad

Agile testing has a radical change in the testing arena where the team no longer works as a “group of testers”. Test engineers no longer need to send test documents and defect reports and wait for inputs from the other members in the project. When testers pair with developers, they may concentrate on the program’s functionality from technology perspective. when they pair with customers, they act like  subject matter expert on the product. Testers form a link between the customers and the developers to explain their different perspectives. Testers thus become the essential glue that brings together the customer perspectives of product requirements and developer perspectives of technology and implementation.Selenium training in Hyderabad.

A typical Agile project day starts with a meeting called the stand up meeting. At the start of each day, the team meets to decide on the plan of action for the day. During this meeting, the team brings up any clarifications or concerns. These are discussed and resolved. The entire team gets a consistent view of what each team member is working on. Testers present to the project team the progress of the project based on the test results. Other points of discussion could be missing requirements or overshooting of estimates due to an issue or time spent on various activities the previous day. The stand up meetings being daily meetings enable quick reactions to changes. Even though the roles of testers and developers are presented as though they are different, in Agile model there is no boundary between their roles. People cross boundaries and perform different roles in this model.